The 5 Best Casino Games for Beginners

With millions of people visiting the casinos around the U.S. each year, they continue to be a highlighted destination for many people. Some plan their entire vacation around popular casinos, such as Caesars Palace, and there are some who just casually jump over to a local casino for just the evening or short weekend. For anybody’s first visiting the casino, it can definitely be intimidating and a bit overwhelming, but with a little planning on what you can expect can help prepare you.

Trying to decide which game(s) to try for the first time can be difficult for most people. On the plus side, there’s a wide range of games available, which is also one of the reasons why so many people love the games at the casino. Some people know right away which games they are going to play, whereas some have no idea at all. Some like to simply stick with slot machines, while others want more of a thrill with craps or roulette. And then there are those who want to spend their time on as many types of games as possible.

Below are 5 casino games we believe are the best for beginners: 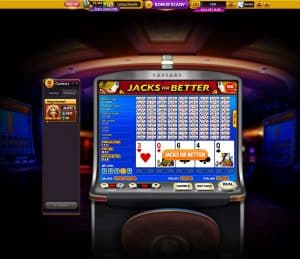 Below we’ll discuss some casino games we believe have the best odds of winning for players when comparing to other games. They may appear complicated at first, but with a little practice, they’re pretty easy to learn.

Blackjack as mentioned before, it’s a simple game to learn at the casino and one of the most popular table games in the U.S. Another reason is that the house edge is probably the lowest found in the casino with usually only 0.5% or less. This percentage from the house edge means that the casino predicts to win over the long run after thousands of bets have been made. That means, depending on the house edge, you usually have a 44 to 45% chance of winning for each hand you play. This can be great as long as you follow the basic strategies and stop when you’re ahead.

Roulette should be the next casino game on your list. It’s another easy game and the house advantage is pretty low. For example, if you bet on just red or black numbers, you have close to a 50% chance of winning. That means you can double your bet if you pick all red and the ball lands on red, or if you pick all black and the ball lands on black. On the other hand, if you bet on just one number, your chances of winning are very low, but the potential payout for you is much higher.

Craps is probably the most intimidating game you can find on the casino floor. You have to have a group of people with you and there can be a lot of others who just stand there and watch. After you learn how to play, it’s a pretty easy game as all you have to do is bet on a dice roll. The odds for this game is pretty good and is usually somewhere around 50 – 50.

Baccarat is another popular game in the casino and has been around for decades. It’s a simple card game, but one of the advantages it has over other card games is that usually has a fairly low house edge. There’s also no decision making involved really as all you have to do is guess.

Keno the odds for this game are not that high for people. It may sound appealing that you’re playing for a big jackpot, but your chances of winning that jackpot are slim to none. It’s more like trying to win a lotto, which is very unlikely, but if you enjoy the lottery, then maybe this is the game for you. The house edge for this game is usually around 25%, which is very high.

Big Six is not a very common game you’ll see active at the casino anymore, which is probably a good thing as the odds for this game is huge in the casino’s favor. It is sort of like a game you may see at the carnival and unfortunately doesn’t really have a strategy for winning.

War just like the card game you’re probably familiar with as a little kid. This game hasn’t been around the casino floors for very long until the movie Vegas vacation came out. The chances of winning anything on this game are very slim. This game has a pretty high house edge and is a fast-paced game which doesn’t require many decision makings. The house edge is usually between 2 – 2.5% and the payout is usually only 10 – 1, which is not very good for the people at all.

Through all this discussion, it’s important to mention that there’s no right or wrong when selecting which games to try for the first time as these are just casino games we feel are good to start with for beginners. As far as the games having the best and worse odds, that doesn’t mean you should expect to win or will lose at these games, but simply the games we believe have the lowest and highest odds for people. In any case, we hope some of these suggestions will help you as a beginner or even for those who need some direction the next time they visit the casino. In the end, it’s up to you. You may not care about the odds and prefer sticking with the games you simply enjoy playing the most, which is fine, and we always recommend everyone one to have fun.

In fact, if you’d like to play for free, Caesars Casino online offers a variety of casino games, including Blackjack, Roulette, video slots, classic slots and video poker you can enjoy anytime!